Madagascar: Off the Beaten Track

Madagascar is a land of exotic contrasts with stunning natural phenomena and many endemic species of animal and plants. This tour visits some of the less well travelled areas of the island such as the Kirindy Reserve located on the west coast of Madagascar. This dry deciduous forest houses a variety of diurnal lemur such as the Verreaux's sifaka and the red fronted brown lemur. Also visited on the west coast is the Tsingy de Bemaraha National Park, the largest protected site on the island. The word Tsingy in the local Malagasy dialect means 'walking on tiptoes' and refers to the area's unique topography where forests of karst spires rise up to create a bizarre looking landscape covered in between by trees, lakes and mangroves. On the east of the island lies the Masoala National Park, the largest yet least visited of Madagascar's protected areas with rainforest, coastal forest, marsh and mangrove habitats that support around 10 different species of lemur. From June to September, humpback whales can be seen in the area from the golden beaches of the Bay of Antongil while three marine parks also protect important coral reefs and a diversity of marine life. 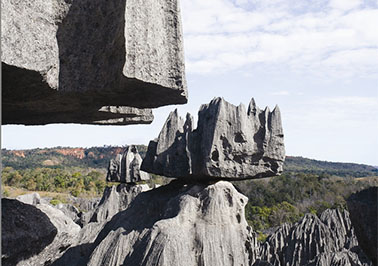 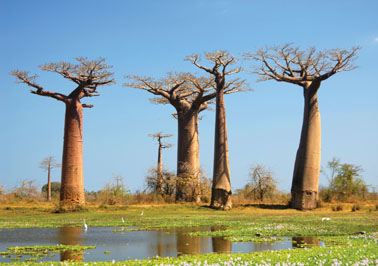